It’s World Sea Turtle Day! Did you know they have existed for over 100 million years? That means they shared the planet with dinosaurs! But unfortunately, thanks to humans living with them in this era, they are in serious danger. Out of the seven species of sea turtles in the world, six of them are classified as either threatened or endangered.

What’s happening to the sea turtles?

More than 1,000 sea turtles die every year due to plastic pollution.

Currently one of the biggest problems that sea turtles face is eating or getting caught up in plastic garbage. Single-use plastic bags, which looks like a yummy jellyfish to a turtle, are often mistakenly eaten, making them very sick.

After hatching, baby turtles may get lost in washed-up plastic on the beach before they can even make it to the water. Every year, eight million tonnes of plastic ends up in the ocean, which is like dumping one whole garbage truck full of plastic into the ocean every minute for a year!

Lend a Helping flipper on World Sea Turtle Day! We’ve got an easy-easy DIY project for you that will both upcycle an old t-shirt AND help you cut out plastic bags that could end up in the ocean at the expense of our sea-shelled buddies! You won’t even need the sewing supplies. All you need is an old t-shirt and scissors!

Our mission to help sea turtles and other marine animals doesn’t end with plastic bags! Other single-use plastics (also known as SUPs) like straws, water bottles, plastic cutlery, and take-out containers are some of the biggest culprits when it comes to plastic pollution.

Think about the times you used a plastic straw, cup, or water bottle to have a drink. Have you eaten a meal from a takeout container using plastic cutlery? Did they all go straight into the garbage? Well, you’re not alone. SUPs are everywhere! 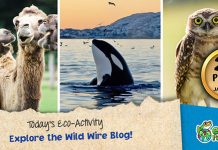 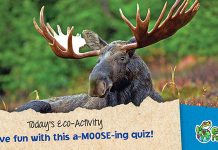