The world is split up into several biomes but scientists just can’t agree on how many, so we are going to look at six major types: Freshwater, Marine, Desert, Forest, Grassland, and Tundra.

This biome is the driest; it only receives 50cm of rainfall a year (about 10% of the rainfall in the rainforest). Its plants and animals have to survive in an environment with little water and dramatic temperature changes from day to night. Some animals and plants may find if difficult to adapt, but reptiles and cacti thrive in these conditions.

Forest biomes cover about 1/3 of the Earth’s land surface. They are dominated by trees and contain many different plants and animals. Forests take in the carbon that we exhale and give off the oxygen we breathe in, making them really important to our survival.

Freshwater is water that has a salt level of less than 1%. Most species living in freshwater cannot live in salt water, although there are some exceptions. This biome also plays an important role for life on Earth. It provides drinking water for humans and other animals, it is also vital for plant growth.

It may not surprise you to hear that grasslands are filled with grasses. However, the length of the grass and the number of trees within these biomes vary depending on the amount of rainfall. Since rainfall in the grasslands is lower than rainforest but higher than desert, trees exist, but they are limited to growing near streams and other water sources.

This biome covers more of the Earth’s surface than any other – about 70%. Some areas are so deep that they can contain entire mountains and even volcanoes. Like many of the other biomes on the planet, they play an important role.  This biome provides most of the rainwater that comes down from the sky and it is home to some of the planet’s most diverse species.

This is the coldest of all the biomes and species diversity is limited as a result. In fact, its name comes from the Finnish word tunturi, meaning treeless plain. It receives even less rainfall than most deserts, although it remains wet because the cold temperatures delay water from being evaporated. Plants, such as mosses and lichens, adapt to these frigid conditions by having a shorter growing season.

Find out more in Introducing Biomes and keep an eye out for the biomes colour edition coming soon to a Wild Wire post near you! 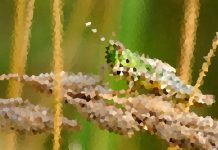 Quiz: If your life was made into a movie, which arctic...

Top Ten Reasons Earth Month is for the Animals