Fierce and tenacious, wolverines live in northern boreal forests and up to the Arctic Circle—one of the most rugged, inhospitable terrains on Earth. They are solitary creatures that wander huge distances in home ranges that can exceed 500 square kilometres, where they forage for fruits and vegetables, hunt prey large and small, and scavenge from carcasses. The wolverine’s considerable habitat needs are compounded by the fact that this species is highly sensitive to human disturbance, sometimes even abandoning their dens if they detect humans nearby. As land is developed and wolverine territory is increasingly being used for human recreation, the large, contiguous tracts of land available for wolverines to live, hunt, and breed are getting harder to find. In addition, wolverines use high snow levels for dens to raise their young and cache food—so as climate change intensifies and heavy snow pack areas shrink, wolverine populations are running out of room. 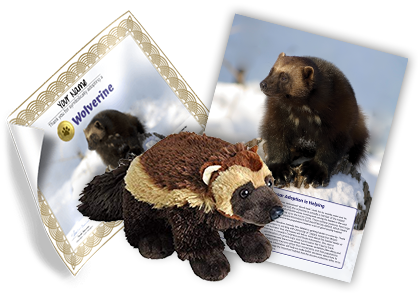 Your adoption will help Earth Rangers support University of Calgary researcher Mirjam Barrueto as she works to learn more about the habitat needs of wolverines in the Columbia and Canadian Rocky Mountains. Mirjam’s goal is to assess wolverine abundance, and investigate any interactions between natural habitat quality, human activities (like skiing, backcountry tourism, and forestry), and wolverine distribution. Using non-invasive methods like motion sensor camera traps and hair traps that will also allow for DNA analysis, important data is being collected that will help inform backcountry tourism partners and provincial land use managers on how to optimize their wildlife protocols and balance land uses.

This project is generously supported by: