An international team of field biologists with Conservation International just came back from an incredible expedition! The team traveled to the remote forests of Southeastern Suriname, in South America, an area that holds 25% of the world’s remaining rainforest.

For three weeks the field biologists, with the help of the local indigenous community, ventured deep into this mountainous region. The team worked to survey species in four sites ranging from low floodplains to isolated mountain peaks. They collected tons of information, like water samples and 1,378 species. This area was so rich in biodiversity that they uncovered 60 species that are potentially new to science. The new species they found include six frogs, one snake, 11 fish and many insects. Meet two of the new species the scientists discovered:

Name: lilliputian beetle (Canthidium cf. minimum)
Details: This tiny brightly coloured red beetle is only 2.3mm, which has earned it the title of the second smallest dung beetle in South America.

Name: Cocoa frog (Hemigrammus aff. Ocellifer)
Details: This frog reminds everyone of chocolate because of its brown colour. They have a sleek body and round discs on their fingers and toes to help them climb into the treetops.

Many of the planet’s wild spaces have been developed, that’s why it’s so important for us to protect the areas that remain, like the forests of Suriname. Conservation International has been working with the local government and communities to assess what species live in Suriname and ensure they are protected. The scientists discovering new species in Suriname are a really important part of this conservation plan, because the more we know about an ecosystem, the better we can protect it. Being a field biologist and getting to explore places like remote rainforests in South America sounds really exciting, but it’s also a tough job and sometimes dangerous. When the rainforest flooded the scientists had to pack up and get out quick! In this video the team escapes the flooded forest thanks to the help of a local guide who took them through the raising water in wooden canoes.

The largest of all South American dung beetles, despite their name they feed more on carrion (dead animals) than on dung © Trond Larsen

One of the 19 snake species encountered on the expedition, their bright colours fool predators into thinking they have the deadly venom of a coral snake © Piotr Naskrecki

This frog is one of the newly discovered species. Poison dart frogs are famous for the often powerful toxins they secrete © Trond Larsen

46 frog species were found during the expedition, including this tree frog © Trond Larsen

Would you want to work as a field biologist? If so, where in the world would you love to explore? Post your comment below.

Find our more about Conservation International 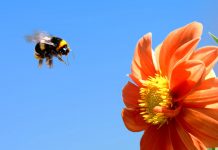 Introducing the Name a Wolverine Contest!

Elephants can make noises as loud as 103 decibels. That’s like...