Avery has big dreams, when asked what he wants to be when he grows up he says “a paleontologist, a film maker and a monster truck driver”.  So where does a young man with such plans go for fun, Costa Rica to save turtles of course! Avery’s love for the wild all started by watching National Geographic videos, from these nature clips he got inspired to find out how things work.

Driven by his passion for dinosaurs, animals, bugs and reptiles oh my! Avery set off on a family adventure, filming how he and his parents are making a difference on our planet. This summer Avery and his family went to Costa Rica, where they helped the Olive Ridley Sea Turtles. Avery helped to patrol the beaches at night during the turtle’s nesting season. This budding filmmaker also got his hands dirty by helping to measure this endangered animal’s shell and tagging flippers for scientists. He also had to count and record all of the eggs. Did you know turtles often lay over 100 eggs at a time? That’s a lot of counting! Avery was awarded the rare opportunity to release a family of newly hatched turtles into the ocean. He says this was his favourite part because “They were so tiny and cute! They needed our help because their mom wasn’t there to show them where to go”.

Avery made this video to tell his school all about the endangered Olive Ridley Sea Turtle, and how we can help them. Even though he’s only in Kindergarten, all of the kids now know him for his work with the sea turtles!

Who should be the next Super Ranger? Tell us whose amazing acts of green we should feature! 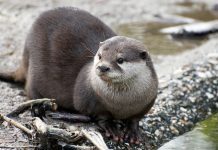 What Do You Think About Climate Change?