After exploring the underwater world of the Freshwater Biome we can catch our breaths as we take a look at a grassy biome.

Not surprisingly, the Grassland Biome is dominated by grass! There are all kinds of grasses, both short and tall. The height of these grasses is so different because some get more rainfall than others. At times it may seem like the rain will never end, but then the dry season comes. During this time, the biome can get so dry that fires can be quite common. These fires may seem like a terrible thing, but don’t worry, they are vital to the Grassland’s wildlife. The fires burn away the dead plants and debris and once the rainy season returns new buds can grow.

Details: Red milksnakes usually grow to 76cm, but they can exceed 91cm (over 3 feet). Notice how the red markings on the snake pictured above stop part way down its body. This saddle pattern is how you can tell the Red milksnake from other members of its species, whose bodies are lined with rings.

My Hood: Found in the central U.S., from Indiana and Kentucky to South Dakota and Oklahoma. Red milksnakes live in areas where rodents and amphibians are plentiful. This includes open woodlands, grassy hills and streams. They also do well in savanna habitats.

How I fit in: Red milksnakes like to stay out of sight – they will hide under rocks and even burrow if the soil is loose enough. When they spot something tasty, this powerful constrictor emerges from hiding to wrap its body around its prey. It squeezes its prey to death then swallows it whole. Although harmless to humans, they are often mistaken for the poisonous coral snake because they have similar colour patterns.

Details: This species of milkweed grows 45-76cm tall and 45-61cm wide with leaves that measure 5-15cm. Each flower it produces has 5 petals, ranging in colour from pale yellow to bright red. These flowers grow in clusters of 20 or more.

My Hood: Found in Eastern North America, this plant loves the sun. It grows in places where it can have full access to sunlight like prairies, open woodlands and even along roadways.

How I fit in: Butterfly Weed serves as a good food source for butterflies, caterpillars and hummingbirds but it has a special relationship with the Monarch butterfly. Although it produces a milky sap that is poisonous to many species, it is a tasty snack for the Monarch caterpillar. Eating this plant causes the caterpillar’s skin to taste bad, which reduces the likelihood that it will be eaten. Since animals rarely ingest this plant, it also provides protection for the Monarchs’ eggs.

Details: The Golden jackal can grow 70-85cm long, 40cm tall and weigh 8-10kg (17-22lbs). Their yellow fur is short and coarse, and changes shade depending on its location and time of the year. For example, during the rainy season those living on the Serengeti Plains have yellow fur with brown tips but during the dry season they are pale gold.

My Hood: These jackals live in savannas and grasslands with short grasses in North and East Africa, South-eastern Europe and parts of South Asia.

How I fit in: Families of Golden jackals are ruled by two parents who get help raising the young from 1 or 2 other adults known as helpers. These helpers protect the babies while the parents are hunting. They also bring food for the nursing mother. Since these helpers look after the cubs, both parents can go hunting. With two jackals on patrol, their likelihood of catching food increases. You know what they say…two jackals hunting are better than one!

My Hood: Native to the Eastern and Western coasts of Africa, they grow in fertile soil along rivers and at the edge of forests. They also thrive in other tropical and subtropical countries where they have been introduced.

How I fit in: The Elephant grass’ deep root system is extremely important for its survival in this biome. During the dry season these long roots reach deep into the moist soil, which prevents it from drying out when there is little rain. Elephant Grass also plays an important role as a food source, providing a tasty snack for grazing animals.

Details: The male Mountain bluebird has striking blue plumage that fades to white under its breast. The female of this species also sports some of this blue, but they are mostly grey and brown. These birds spend their winters in flocks with Western bluebirds and sparrows.

My Hood: Mountain bluebirds make their homes in the sparsely treed grasslands of Western North America.

How I fit in: These bluebirds can be found further North than many other birds during the winter. They have been spotted in Northern Alaska but are only able to survive in this weather for a short period of time. They belong to the Thrush Family, like the American robin, but are different from their relatives in several ways. Unlike other thrushes, for example, these birds hover above the ground looking for food, much like a hawk. Mountain bluebirds eat mostly insects and fruit and have a bad reputation for being aggressive. They have been known to compete for nest boxes with each other and other species of bluebirds.

Details: These small birds grow to 14cm, have a 16cm wingspan and weigh 9-13g. Its most eye-catching feature is the bright purple heads of breeding males. When not breeding, the purple is replaced with brown but the dark mask around its eyes remains.

My Hood: Found only in Australia, this bird thrives in the thick vegetation and dense grass areas along the rivers of the savanna in the North and West.

How I fit in: Although these birds forage by themselves, they are always within calling distance of a larger group. They protect their territories by singing, warning other fairy-wren that they will be attacked if they come any closer. This Fairy-Wren makes its home in thickets. These thickets are covered with thorns which help protect this purple-crowned bird’s nests from predators.

More splashes of colourful biomes are coming your way soon. In the meantime, find out what a biome is and the different types that can be found on Earth. Up next: the Marine Biome!

To find out more about the grassland biome check out these links: 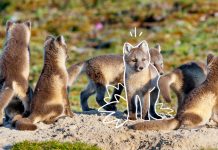 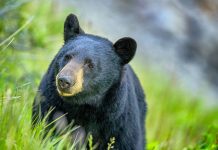 The Leaf Beetle has tiny hairs on its feet that allow...