It might be in South America, but did you know that Bahía de San Antonio is an important site for Canadian migratory birds and other amazing animals? This Argentinian beach provides critical habitat for a number of wildlife species and although it is already protected as a coastal marine area, it’s facing increased development and human traffic that are putting the animals that rely on it at risk.

Red knots are colourful sandpipers that sport brilliant terracotta-orange underparts and intricate gold, buff, rufous, and black upperparts. They have some of the longest migrations of any bird, travelling from nesting areas in Baffin Island, Nunavut, North Hudson Bay and the central Arctic to wintering spots in southern South America. Sadly their populations have declined in recent decades, and they’re now listed as Endangered in Canada. But why? Making the long journey home requires a stopover in Bahía de San Antonio, where the red knot can refuel, rest, and moult. Unfortunately as this important habitat continues to face increased disturbance, fewer red knots are stopping there, which means fewer are able to complete the journey home.

Kids who sign up to be Earth Rangers do so because they care about animals and the environment. Your adoption will help Earth Rangers support International Conservation Fund of Canada (ICFC), Argentinean researcher Patricia Gonzalez and her Fundación Inalafquen, and the Provincial Environmental Rangers, who are working to enforce protection of the red knot at Bahía de San Antonio. Patricia will be working with local rangers and the community to protect the site and reduce the impacts of human disturbance during the annual migration season, which is critical as we work to protect this important link in the migratory chain.

Just a bit bigger than a robin, red knots are tough shorebirds that travel super long distances to get to their nesting grounds in northern Canada. Do you love going to the beach? So do red knots! They will carefully construct their nests near the water. To make sure the eggs stay warm and comfortable, the nests are lined with leaves, lichen, and moss. Since red knots nest on the ground, the eggs are green and speckled to help them camouflage well with their surroundings. 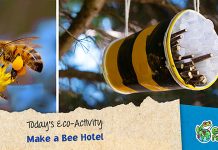