Who would you say is the best father in the animal kingdom? It’s a tough competition, but a little monkey from the forests of South America would definitely be in the running for #1 Dad! 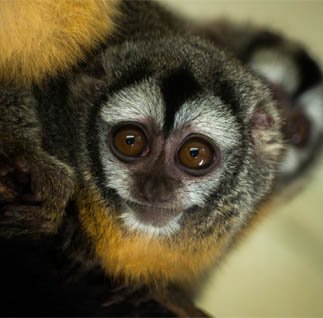 Charlie is an owl monkey from a forest in Argentina’s Chaco region. He loves climbing trees and jumping from branch to branch. As a nocturnal animal, he sleeps during the day and is most active at night, when he snacks on fruit from the trees around him. To Charlie, there’s no better place to be than in a forest.

It’s an exciting time for Charlie because he just became a father! Unlike many other primates, it’s his job to take care of the baby, and it’s a job he takes very seriously.

Mom is on duty for nursing, but it’s up to Charlie to carry his baby around as he ventures through the forest. He’s also in charge of grooming, as well as feeding when the baby is a little older.

Some scientists believe that when Charlie and other owl monkey fathers take care of their young, it helps the mom recover and allows her to save her energy for nursing.

At the end of the night, when it’s time to sleep, Charlie will carry his baby back to his favourite tree to snuggle up with his baby’s mom for a good rest. He’ll need it because when the sun goes down, his fathering duties start all over again.

We think Charlie is a great father and while his baby might not celebrate Father’s Day, you can celebrate it with your dad!

Check out the Fantastic Crafts Mission for some homemade craft ideas to show your dad how much you care, and help protect Charlie’s forest habitat at the same time!